My ex-husband is getting married. In two weeks. I found out about this a week ago.

Being formerly LDS, and married in the LDS temple, where “eternal marriage” is considered the most holy of ordinances, I received a letter from the church asking me my feelings about him being “sealed” to another woman.

“I have no issue with him remarrying,” I wrote.

Of course this has brought up questions from the kids about marriage, and relatiohships, and when I’ll be getting married again. Because that’s what you do, when you’re old and single. Get married. My daughter, Georgia, says I should just say, “Man, I wish someone would propose to me”, and then Special Man will marry me. It’s been a rough week. Not only do I get to process some residual feelings from my failed marriage, but I get to deal with some of those mononormative knee-jerk reactions that I still carry. Marriage is romantic and dreamy. Weddings are exciting, and everyone is full of hope for the future, and love for each other. Weddings validate. It doesn’t matter that my children have yet to meet this new wife of their father, or that this wedding is happening extremely fast for any sane person’s taste. They are still validated because marriage is the ultimate stamp of respectability and acceptance.

I have a stable relationship of two and a half years. A wedding would not make it any more stable or loving, but it’s hard to get away from those societal norms. To be perfectly honest, I think Special Man and I would be terrible domestic partners. Seriously. (I’ve told him this before, and he disagrees, but I think he knows I’m right.) Still, the dress and the doves and the declarations of love…what little girl hasn’t been told that this is the ultimate accomplishment of her young life? And the fantasy still makes me sigh a little, though I’m a realist and I honestly don’t know if I’ll ever marry again.

A romantic commitment ceremony in the woods, however, might be another story.

A few nights ago we had birthday cake for SMF with the kids. It was good, and comfortable. I wouldn’t want to trade my alternative relationship configuration for another automatic marriage. I couldn’t. 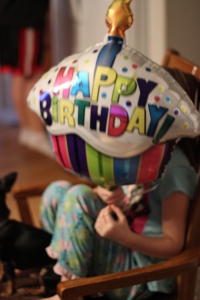 Advice, fierce hugs and love punches from a queer on crutches.

Exploring polyamory and other forms of ethical nonmonogamy

Living life on the prairie like a fat babe does